Procrastinators: NEVER set due dates on your tasks and leave the kitchen floor alone

This may look to many as a blog post about evidence itself but if you are here maybe you need to read this, if only as a way to avoid completing your real tasks.

There is a tight relationship between the way I (badly) handled todo lists and social networks. It's about endless remorse and guilt and how we feed them. I cut down on social networks heavily a few months ago. It brought a lot of relief not to feel obligated to go through these endless feeds but I still wasn't able to work efficiently anyway. It was not all Facebook's fault. 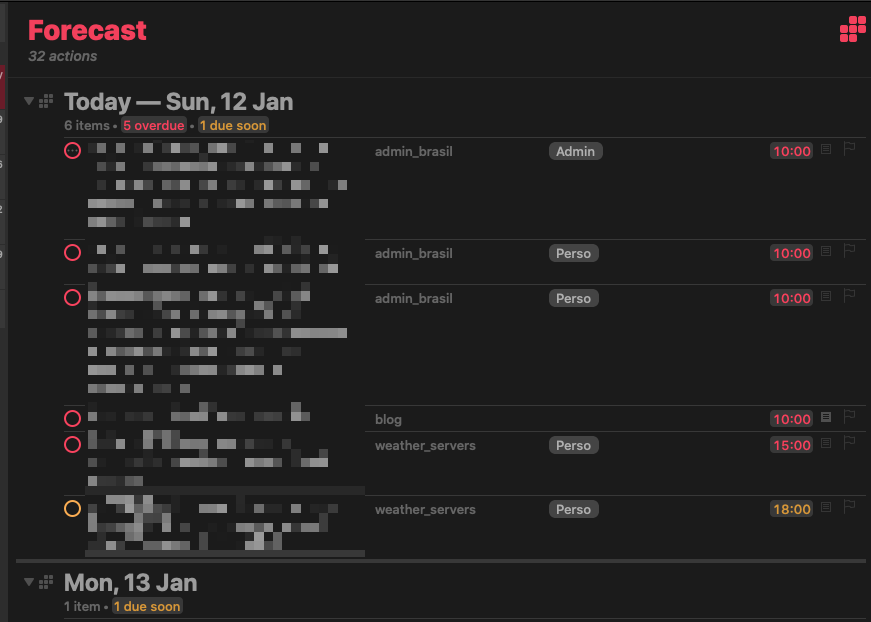 As a good procrastinator I kept this NY Times article in my reading list. Since it's from March 2019, it's only right that I only read it now, in January 2020.

I recommend reading it now or maybe next year. It's never too late.

If you don't want to read it now, I'll sum up what mattered most to me: how we feel when we put off a task. And, trust me, I know what putting off a task means. When I finally cleaned up my todo-list mess today, I found among many others a task from... 2009 about porting to iPhone a J2ME game... Yup, it's been there for over ten full years. But the issue isn't about letting go of old ideas or moving on in general. Having a task in some "ideas" list never hurt anybody. Having it come back in your face every day however will.

Of course postponing a task feeds your imposter's syndrome. It confirms to your insecure mind that you were not able to complete the task, over and over and again so maybe after all you're not capable. Maybe all past successes were just based on sheer luck. Who is this guy who owned iOS / Android apps with over 100 million downloads? Certainly not me. If you developed a taste for feeling bad about yourself and wish to keep the feeling alive: procrastination is a wonderful tool for the job.

But what I didn't give enough attention to until today is that you also get shot of dopamine (or whatever is the correct neurotransmitter) every time you click "next day", "next week" or "next year" on an unfinished task.

**When you postpone, you get relief, in the same way you would get when reaching temporarily the end of your endless social network feed. **

Every day you can feel the same anxiousness over the same unachieved tasks, and the same relief when you postpone them repeatedly – putting the responsibility for your failure on your future self, which as we all know is someone else anyway. So screw that guy.

I have been using OmniFocus for over a decade. I can't praise this wonderful app enough. I always used it in the recommended way. It helped me of course stay focused.

From 2009 to 2015 I built a quite successful mobile app business. However over time it seems it just had grown too much. Too many employees, too many projects I and I had zero interest in all this crap. Worst: I actually shared that feeling with the people I paid to keep the company going. It was all a big cascade of demotivation. I still don't know how to delegate to this day, and – guess what – I don't want to and I am fine with it. I don't like management, and I don't need that much "growth". Inevitably I entered the dreaded burn-out phase, which is a gourmet term for depression.

Everything slowed down and stuff piled up and I wasn't able to cope with any task anymore. Anything requiring more than 20 minutes of concentration seemed out of reach. Not a good situation for a programmer. Having so many active past users for our apps I still kept earning money anyway, due to inertia, even during my sleep. In normal cases of burn-out you'd lose your job, and eventually go on social welfare but hey I owned the company and it still made money so while it was crashing slowly it was always enough to keep me afloat comfortably. I did some tasks, but at maybe 20% of the speed I once had. So it took me a while to seek treatment. After all by the standards of capitalism I was achieving "success" because we now owned a house with a pool in the rain forest.

But this isn't a post (only) about depressive phases: three years into psychoanalysis I realized that lately I had started using my todo list in the wrong way and I got trapped in a loop. Why it started? When it started ? I don't know for sure. Losing the very notion of time is one of the symptoms. It looks like one week late at a time and years go by.

Aside from my obvious personal mental health issues, I suspect I got lost in the loop partly because the UI of OmniFocus changed and the app didn't enforce solid paths for me as hard as previous versions did.

OmniFocus can now have multiple tags on each task instead of just hard categories into projects & contexts. It's the same, but the rigour has to come from yourself, not the tool. If you have a natural tendency to confusion this new "liberty" can be a deadly trap.

Any tutorial on using OmniFocus or other so-called GTD (Getting Things Done) apps will tell you as a first rule NOT to set dates for your tasks. You only set dates for things that have a mandatory due date, such as a dentist appointment or a big release deadline, but not for each step it requires.

For all other tasks you only set an order of execution: first this, then that.

Of course, because I wasn't able to work as efficiently as in the past I started adding due dates for every single task, hoping this would create motivation. This was a huge mistake.

If you can't make it in time it doesn't matter whether it has a date or not. It just adds guilt. And if guilt is the only thing you are unconsciously looking for, you will find it. Every single day.

Adding a stressful date to every task is is essentially as smart as shitting on your kitchen floor every morning to motivate yourself to wash the dishes. Now that there is crap all over the floor, you can't postpone this or people are going to see it!

In the end you only clean the floor – since it's urgent – and then stop there, feeling ashamed but relieved. The dishes? Oh that will be for later.

Like every month since this started my piled up November tasks ended up hitting on the December tasks and inevitably my 2015, 2016, 2017, 2018 tasks ended up hitting my 2019 tasks and before I knew, most of my work time was used for pushing things back and feeling guilty about it while accomplishing... close to nothing. That metaphor about taking a dump on the kitchen's floor wasn't that bad. It also makes for quite an appealing title for this post.

I read that NY Times article around midnight and subsequently spent the night cleaning up my todo lists until around 5 in the morning. I removed dates from 98% of tasks and I feel greatly relieved.

Now I feel like I can actually work again.

But instead I wrote a blog post, of course.

On the next day I went through my e-mail. I had a dozen e-mails in my inbox that were sitting there. They depended on me completing other tasks and I felt increasingly ashamed of seeing them every day. For some reason I could neither delete them nor process them. Some were there for several years... I did the same process of cleaning up. I moved those e-mails to OmniFocus as tasks. With links to the original e-mail and complete copy of the message in the note.

At least they are not in my face now every single day. Best thing about it: I can organize them as tasks and subtasks and I don't need to understand everything now. They'll be there when I reach them, with the correct context.

Also not to lose focus of urgent stuff I remembered OmniFocus could have several windows open at the same time. So I now have my forecast windows on the left and the active project (no dates) on the right.

Update 2: Making sure you stay at InBox Zero in your mail client thanks to OmniFocus:

Back in the days I used OmniFocus Service menu entry to add links to e-mails to todo list items. Somehow I had also forgotten about this gem and I am happy to be using it again. I didn't dare to archive mails for fear of losing the details about upcoming tasks they contained.

It's a bit hidden because it's only visible in Mail - Services menu. Thankfully you can setup a shortcut in System preferences for this service. One keystroke and boom you have a task with e-mail title and a link to the original e-mail in mail app. You can now archive the mail so it gets out of the way and still have it one click away for when you are ready to deal with the task.